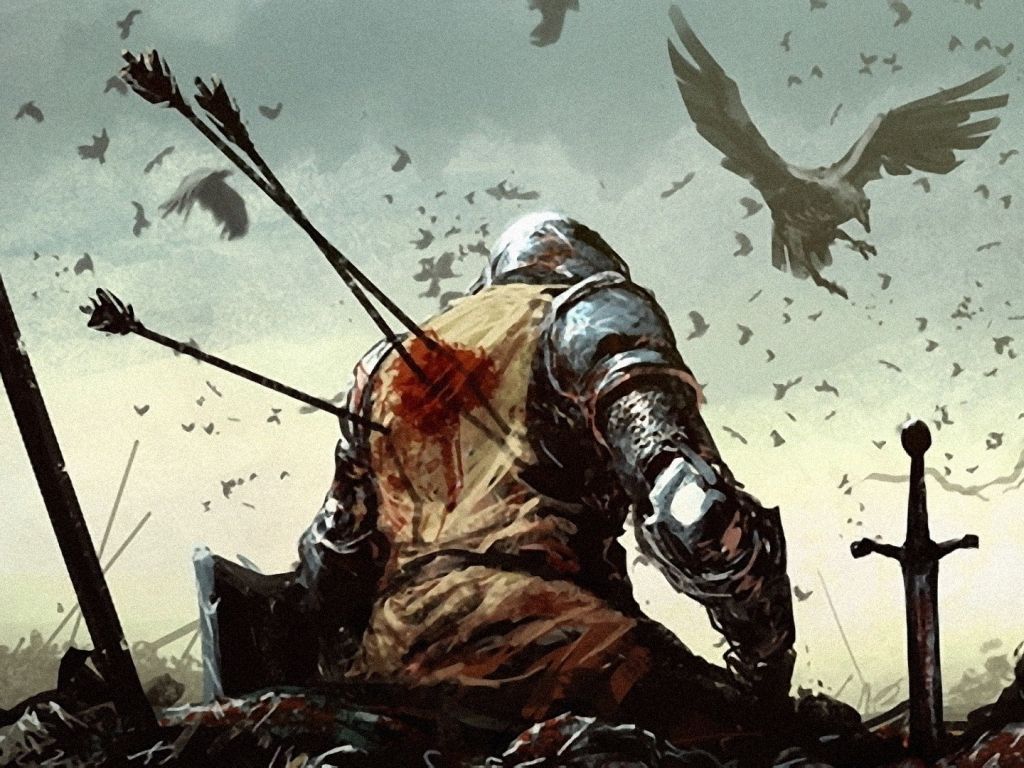 If a Flanaess sage had been asked in 582 CY where the first strike in a continental war would most likely come from, he would not have replied, “from the Hold of Stonefist,” which is exactly where it originated. Founded some 150 years earlier, the Fists were usually considered to be slightly better-organized barbarians than those in the Bandit Kingdoms or in the neighboring lands of the Fruztii, Schnai, and Cruskii tribes.

All the barbarians were inflamed by a rumor that swept their lands: that four of five legendary magical swords, the Swords of Corusk, had been found, and that when the fifth was obtained, a “Great God of the North” would rise and lead them to conquest and greatness. The fifth sword never was found, but in 582 CY, one calling himself Vatun and claiming to be the Great God of the North appeared before the barbarians tribes of Fruztii, Schnai, and Cruskii, and they swept west into Stonefist under his leadership. The Fists were overwhelmed and their leader, Seword Redbeard, underwent a dramatic, if not to say magical, change of allegiance.

Under Vatun’s direction, the Fists swept into the Duchy of Tenh in 582 CY and conquered it quickly. The Duke and Duchess fled to the County of Urnst for safety. The Tenhas’ former Suloise arrogance cost them dear; no help was forthcoming from other nations. Nyrond was nervously watching Aerdy, unable to risk forces far to the north.

Ancient legend predicted that the return of Vatun, who had vanished centuries ago, would signal the birth of a barbarian empire in the north. Unfortunately, this particular “Vatun” was actually Iuz, whipping the northmen into a war frenzy.

The barbarians invaded the Hold of Stonefist, which allied with them after Iuz ensorcelled Sevvord Redbeard, the Master of the Hold. The combined host then smashed through the Griffs and into the duchy of Tenh, which was swiftly overwhelmed.

The alliance forged by Vatun soon collapsed. The Great God instructed the barbarians to invade the small state of Ratik, but their chiefs refused; they had long allied with Ratik against the humanoids of the Bone March and indeed against the Great Kingdom itself. They began to doubt Vatun; very wisely, since Vatun was a sham and a lie, a mask worn by Iuz the Old. But now Iuz was ready to strike elsewhere, both south and east.

The barbarian alliance soon crumbled, but the damage was done: Tenh and Stonefist belonged to the Old One. Returning to his homeland to the east, Iuz then conquered with astonishing ease the Heirarchs of the evil Horned Society long his enemies and a thorn in the flesh of the Shield Lands. With the aid of powerful fiends, his forces made the streets of Molag run red with blood for a week. Iuz’s puppets then ruled from that fell city. Furyondy was invaded, and much of its northern territory was captured and laid waste. Iuz held the northern Flanaess in a death grip.

This strike panicked Furyondy. It sought alliance with the Shield Lands to secure itself against the Old One, but stupidly, the petty-minded rulers of the Shield Lands refused, believing this to be a step in a planned annexation by Furyondy. They paid dear for their foolishness. Iuz feinted an attack westward. Meanwhile, his main body of troops struck far to the east and southeast, into both the Bandit Kingdoms and into the Shield Lands, which they flanked to the east from bases in the old lands of the Horned Society. Admundfort and Critwall fell swiftly. Lord Holmer, who had refused a pact with Furyondy, was taken to meet his fate in the dungeons below Dorakaa.

Furyondy was able to hold its eastern border at the great Battle of Critwall Bridge (583 CY). To the north, however, a massed humanoid force, swollen with mercenary humanoids from the Vesve Forest hired with looted gold, advanced almost unto Chendl, the capital, and took Crockport. After many battles and a desperate relief of a besieged Chendl, both Furyondy and Iuz were stretched to their limits. Still, to many it seemed like a provincial war of northern states; which is when the true hammer blow fell. The Great Kingdom struck, massively and on many fronts.

Taking advantage of the chaos, Ivid V ordered the Great Kingdom’s armies to muster, with the intention of paying back his foes for centuries of impudence. The war that followed was staggering in scope and consequence. Almor was utterly destroyed; Nyrond was invaded; Sunndi was conquered. The nobles of the Great Kingdom fell upon one another, terrified of their insane overking and eager to steal the lands of their neighbors. In the chaos, Medegia was despoiled and Rel Astra attacked by the Great Kingdom’s own military. Ivid attempted to ensure loyalty by having his generals and nobles assassinated and reanimated as intelligent undead (animuses), with all the abilities they possessed in life. He in turn was also assassinated, though the church of Hextor restored him to undead “life,” after which he became a true monster known as Ivid the Undying.

The madness of war bred more war. In 584, south of Greyhawk, a half-orc named Turrosh Mak united the vile nonhuman tribes of the Pomarj. Mak’s armies boiled north, conquering several of the cities of the independent Wild Coast, then capturing nearly half of the Principality of Ulek. The appeals of Prince Corond of Ulek to Yolande, the elven queen of Celene, fell upon uncaring ears. Celene closed its borders to even its most trusted allies, refusing to let elf blood fall in human wars.

This same year, decade-old paranoia regarding the Scarlet Brotherhood came true, as advisers in courts throughout the Flanaess were found to be Brotherhood agents. The Lordship of the Isles, Idee, Onnwal, and the Sea Princes fell under the influence of the Scarlet Sign, from treachery or invasion. Barbarians from Hepmonaland and the Amedio Jungle were used to secure captured lands. The Brotherhood was revealed as an evil, racist order dedicated to preserving the culture and purity of the ancient Suel Imperium, without regard to the lives of others.

For three years, the whole of the Flanaess flew banners of war. Nations fell as new empires were born. Demons and devils from the Outer Planes were summoned en masse by Iuz and Ivid V, and hundreds of thousands of mortals died. Finally, the battle-weary combatants gathered in Greyhawk to declare peace. Harvester 584 CY was to see the signing of the Pact of Greyhawk, fixing borders and mandating an end to hostilities.

On the Day of the Great Signing, however, Greyhawk suffered a great treachery: Rary, one of the Circle of Eight, destroyed his companions Tenser and Otiluke in a great magical battle, then fled. Many suspected that the former Archmage of Ket had hoped to hold the ambassadors hostage, perhaps capturing Greyhawk itself in the process. Instead, he and his cohort, Lord Robilar, went to the Bright Desert to form their own kingdom. Fearing further disruptions, the delegates hurriedly signed the Pact of Greyhawk. Ironically, because of the site of the treaty signing, the great conflicts soon became known as the Greyhawk Wars.

Ascendant campaigns can view previous versions of their pages, see what has changed (and who did it), and even restore old versions. It's like having a rewind button for your campaign.

We've already been saving your edits, so if you upgrade now you will have instant access to your previous versions. Plus, you have our no risk refund guarantee , so there's nothing to lose.

I'm sorry, but we no longer support this web browser. Please upgrade your browser or install Chrome or Firefox to enjoy the full functionality of this site.